The Government is one step closer to achieving 1800 extra constables by June 2023 with the graduation of 39 new officers from Wing 346 today, Police Minister Poto Williams says.

“Police have been at the forefront of our COVID-19 response, while also working hard across the country to keep our communities safe and I would like to congratulate Wing 346 on joining this vital public service at this exceptional time,” Poto Williams said.

“It is particularly heartening to see over 50 per cent of today’s graduates are women, demonstrating Police’s commitment to reflecting the communities they serve.

“In the last 12 months, women made up 44 per cent of all graduates from the Police College – the highest rates ever achieved. In the same period, Māori represented 23 per cent of graduates, Pacifika 12 per cent, and Asian 15 per cent – making up half of the total graduates in this period.

“Our Government’s record investment in the Police service has driven its growth and it is now the largest police workforce ever, with 2,777 recruits having graduated since July 2017, including this wing. The total number of police officers now stands at 10,050, up from 8,839 in July 2017.

“I also want to acknowledge our Police officers for their role in the COVID-19 response, from manning checkpoints, to reassurance visits, to compliance checks. To our officers – thank you.

“Last week we announced $45 million to accelerate Police’s new Tactical Response Model to increase the training and capability of frontline staff, furthering our commitment to keeping our police safe so they can keep our communities safe. As Police Minister, I want to ensure Police have the people, resources, and legislation they need to do their job,” Poto Williams said.

The new constables will start work on the frontline in their districts on Monday 11 October. They are being dispersed to districts as follows: 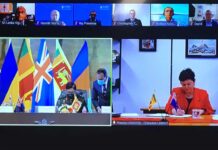