Police have arrested and charged a 40-year-old woman with murder in relation to the death of three children in Timaru last night.

The woman is due to appear in the Timaru District Court tomorrow morning.

Police would like to reassure the community that this was a tragic isolated incident and we are not seeking anyone else.

An earlier release stated one child was aged seven and two were three. This is incorrect, they were aged six and two.

We apologise for this error.

A scene examination will continue at the Queen Street address tomorrow.

As this matter is now before the courts, Police will not be making any further comment. 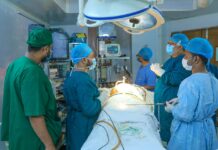