The firearms, a shotgun, rifle and AR-15-style semi-automatic, were located at one of the addresses.

Three men, two aged 28 and a 22-year-old, have been charged with offences related to the March 21 Victoria Street assaults and participating in an organised criminal group.

The 22-year-old man was also charged with firearms offences.

The investigation is on-going and more arrests are likely. 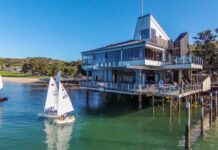