New Zealand now has one of the world’s most ambitious frameworks for tackling the climate crisis, the Minister for Climate Change James Shaw said after the Emissions Trading Reform Bill passed through Parliament this afternoon.

The legislation fixes the Emissions Trading Scheme and turns it into one of the most effective tools New Zealand has for reducing climate-polluting emissions.

“In a single term we have taken more action on climate change than the past 30 years of governments combined. Today we have reached another significant milestone in our plan to reduce New Zealand’s emissions.

“There is a long way to go, but we are starting to bend the curve towards a climate-friendly future in New Zealand. Alongside the Zero Carbon Bill, which was passed unanimously by Parliament last year, this Bill means that we now have the foundations in place for long-term meaningful climate change action in New Zealand,” James Shaw said.

The changes made by the Bill include setting a cap on the total emissions allowed within the ETS. This is something the previous government had failed to do, leaving the scheme too weak to have any real impact on reducing our emissions.

The Bill also includes a range of necessary rule changes that will incentivise New Zealand’s biggest polluters to invest in the transition to a clean, climate-friendly economy.

“Until now, the ETS has not fulfilled its primary purpose, which is to reduce emissions. Taking action to fix this puts us further ahead on climate action than many other parts of the world – and that’s even before you consider the huge progress we have made over the last three years,” James Shaw said.

Over the last three years, this Government has:

“When we came into government we had a choice. Continue down the carbon-intensive path toward climate breakdown, leaving our kids to suffer the consequences, or create something better: an economy that is more equitable, more prosperous, and more innovative – all within planetary limits.

“This Bill, and every action we have taken that preceded it, is a result of that choice – the choice we made to build a better future. Today, that future is closer within reach than it has ever been before,” James Shaw said. 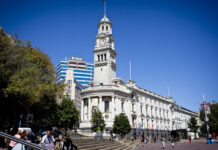 Have Your Say on changes to the property maintenance bylaw