Hutt City Council has voted in favour of signing up to the Race to Zero climate initiative, joining more than 730 cities around the world that have publicly committed to reducing carbon emissions.
Race to Zero, a global campaign run by the COP26 Presidency (26th United Nations Climate Change Conference of the Parties) is the largest global alliance of organisations working together to build global momentum towards the shift to a decarbonised economy.
Lower Hutt Mayor Campbell Barry says that once signed off by council, Hutt City will be the second council in New Zealand joining the Race to Zero, and this would show a commitment to do our part towards containing global warming.
“We know that the world is facing a climate crisis, and we must act now if we don’t want our city to feel the full force of climate change.
“Joining the Race to Zero will primarily support our Community Climate Change Response, which in turn will set out how we halve city wide emissions by 2030, and then get to net-zero emissions by no later than 2050.”
“This decision follows on from the work we’re currently doing to lower emissions like council’s first internal carbon reduction plan, rubbish and recycling service change that lowers waste to landfill, installing a methane burning flare at the Silverstream landfill, and securing funding to install EV chargers around the city.”
Councillor Josh Briggs, Chair of the Climate Change and Sustainability Committee, says that by joining the Race to Zero, council will reconfirm its commitment to climate action.
“The decisions we made today at committee ensures the continued work with the community on a city-wide roadmap with clear carbon reduction targets. It’s going to require collective action – we need everyone in our communities to reduce their carbon emissions.”
“To ensure transparency, Council will report annually to the committee on the progress we’re making to lower emissions, and also work with our partners, businesses, and residents to help us deliver the outcomes needed to combat climate change.”
COP 26 organisers hope the growing success of Race to Zero will send a strong signal to governments around the world that cities, regions, businesses, and investors are united in creating a more inclusive and resilient economy, and meeting the goals set out in the Paris Agreement, an international treaty on climate change.
The next meeting of COP26 will be held in Scotland in November, and participating governments will be asked to accelerate their contributions to the Paris Agreement. 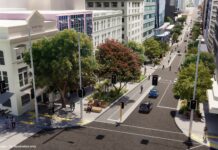