Waiheke Local Board will see a change of Deputy Chair this month following member Bob Upchurch’s resignation from the role.

Mr Upchurch announced his resignation as Deputy Chair at the board’s monthly Business Meeting last week, saying he will continue as a Board Member for the remainder of the term.

“It’s time for me to help ensure the future of the board,” said Mr Upchurch.

Following discussion amongst the board during the Business Meeting, member Kylee Matthews was unanimously voted in as the new Deputy Chair.

Ms Matthews acknowledged the support she has received from Mr Upchurch, Chairperson Cath Handley and board members Robin Tucker and Paul Walden over the last 18 months.

“As a new board member, I’ve been on a steep learning curve since this journey began.

“I’m ready to step up into the Deputy Chair role after having gained experience on the board and I know I’ll continue learning in my new role.”

Mr Upchurch, a former teacher, said he likes to make way for the young ones to come through.

“I have every confidence in Kylee as the board’s new Deputy Chair. Kylee is dedicated to representing Waiheke’s communities and she’s already a leader on our island.

“She’ll do great and I’m excited to see her development in the role.”

“Over the last 18 months, Bob has been a great support to me in the board’s work and in particular his readiness to jump in at short notice to cover for me when I’ve had other commitments, has been really appreciated.

“The Deputy Chair has to be ready to chair public meetings and keep order in meetings.

“I look forward to working with Kylee in her new role, and continuing to work with Bob, Robin and Paul over the rest of the term.”

The Deputy Chair role officially changes hands on 28 April 2021. You can find out more about Waiheke Local Board and contact them at their website. 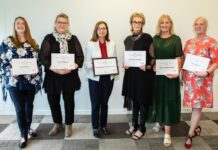