The world has 10 years to halve global greenhouse gas emissions. By 2050 the world needs to achieve net-zero to avoid global warming of above 1.5C.

“Climate technology is regarded as the new frontier for venture capital: as well as innovation in energy and agriculture, innovation in finance is required. It will be a big part of next month’s Techweek2021,” he says.

“The greatest opportunities will no longer be found in the overbuilt sector of consumer and business internet applications. Instead, they’ll be found in climate tech.

“Climate change is the defining crisis of our time, and as it becomes more imminent, our efforts to address it will become the epicentre of the next entrepreneurial revolution.”

Electric vehicles are only the tip of the iceberg. A recent PwC report found that climate tech investment increased from $418 million per year in 2013 to $16.3 billion in 2019, growing at five times the venture capital market rate over the last seven years.

“Heating and cooling systems, agriculture, raw materials, and manufacturing are all overdue for reinvention as we strive for a greener future, creating the promise of even more innovation on the horizon.”

The climate will also reshape residential and office construction, insurance, finance, and agriculture, in regard to where and how food is produced.

Technology improvements have resulted in systems investments at landfills to capture methane and use it beneficially for renewable electricity and renewable fuel.

Early findings suggest a lack of investment in solutions to environmental problems could be contributing to fewer innovative Kiwi climate tech concepts being commercialised.

Muir will take centre stage during next month’s Techweek2021.

“A few Kiwi businesses have struck gold in the climate tech space, including LanzaTech, with their CO₂ emission-reducing technology turning industrial gas into ethanol which can be used as jet fuel.”

“Fonterra, one of our largest companies, is partnering with Dutch multinational corporation, Royal DSM, to create methane-reducing technologies for the agriculture sector.” 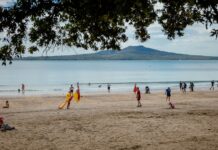