A new study has found that two-thirds of people who could spot a rip current in photographs could not pick one out in real life.

A worrying new study has highlighted that up to 78% of beachgoers in Aotearoa New Zealand are unable to spot rip currents (rips) in the surf, increasing the risk that they may inadvertently end up caught in one.

On average, five people fatally drown in rip currents on our beaches each year and a further 700 people require rescue.

The study, conducted as part of a collaboration between Surf Life Saving New Zealand (SLSNZ) and beach safety experts at the universities of Canterbury, Auckland, Waikato, and UNSW Sydney, found that most beachgoers were unable to accurately identify rips.

“What we observed was a dangerous and well-established rip current moving quickly offshore from the beach, and when we asked beachgoers to point it out to us, the vast majority were unable to do so,” says study author Senior Lecturer in Physical Geography Dr Seb Pitman, a coastal geomorphologist at the University of Canterbury.

The study was conducted at Muriwai Beach on Auckland’s West Coast, well known for its energetic surf conditions.

“Rip currents are like narrow rivers of water that start near the beach and flow offshore various distances beyond the breaking waves. They commonly occur in deeper channels that are cut between sandbars, which means waves don’t break as much in the rip current – this means that beachgoers often mistake them as the safest areas to swim because the water looks so calm when compared to the breaking waves either side”, Dr Pitman says.

One of the study collaborators, Professor Rob Brander from UNSW Sydney believes that teaching people to understand and identify rip currents is “extremely important,” as many people continue to swim at non-lifeguarded beaches and outside of patrol hours.

SLSNZ’s Chief Operations Officer, Adam Wooler, agrees. “Rip currents account for about 80% of the rescues our lifeguards perform each year,” he says. He believes many of these rescues are the result of people not knowing how to spot a rip.

The researchers also looked at whether people were better able to identify the rip current in a static photograph, as this was the main way many Kiwis are taught about rips – and these sorts of images feature prominently on warning signs. The study found two thirds of people that could see the rip current in the photographs could not pick one out in real life.

“This finding is a real concern and has implications for how we should educate people about rip currents in the future,” says Wooler. “It also reiterates that the best way to stay safe at the beach this summer is to choose a lifeguarded beach and swim between the flags.”

IF YOU GET CAUGHT IN A RIP, REMEMBER THE 3Rs:

RELAX and float to conserve your energy

RAISE your hand to signal for help

RIDE the rip until it stops and you can swim back to shore or help arrives. 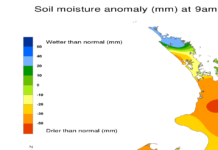 First Union – Government action needed to turn around wave of...