Massey University researchers have tracked a godwit’s epic journey from New Zealand to Alaska and back again, as part of a project to learn more about the species’ decline in New Zealand.

The bar-tailed godwit, or kuaka, is a northern hemisphere species of shorebird that flies 18,000 km from New Zealand to the Arctic from March to May to breed each year. The birds stop to feed in the Yellow Sea region between mainland China and the Korean peninsula for up to 45 days before making the last leg of the journey to Alaska.

Unlike seabirds, godwits cannot land on water and their 10,000–11,500 km migratory flights are the longest endurance flights undertaken by any bird.

The bird, named 4BWWY, was one of 20 godwits satellite-tagged in Pūkorokoro–Miranda last November. It departed on its northward migration in March, arrived in Alaska in May and had been refuelling on mudflats in Alaska since mid-June. After travelling approximately 11,300 km across the Pacific Ocean in nine days and nine hours, 4BWWY arrived back in Pūkorokoro on Monday evening.

Although the godwits’ long journey is well-known by researchers, this is only the second full track of a trans-Pacific flight of a godwit tracked in real time by satellite tags. The first was when researchers tracked the bird E7 in 2007, which holds the world-record for the longest flight by a shorebird.

Massey University’s Associate Professor in Zoology Phil Battley says the tracking technology has come a long way since 2007 and this time the researchers have been able to get a better picture of the birds’ routes and the weather conditions they’ve encountered.

“The weather conditions have been more challenging than usual this year, and through tracking them in real time we’re learning a lot about their ability to cope with adverse winds.

“One of the birds hit a cyclone off Queensland in March and fought it for several days, and then turned around and came back to New Zealand. It did a 6,000 km flight, 7 days of flying, and ended up exactly where it left from. We thought that was it for the year– but two weeks later, it gets up and migrates all the way to Alaska. It was pretty epic.”

The researchers are investigating the effects of habitat loss and climate change on the birds, to find connections with their declining numbers. “The feeding grounds godwits visit in the Yellow Sea region that once were mud flats are being reclaimed and turned into fishponds, and we are seeing the destruction of natural ecosystems and food chains collapsing.”

Dr Battley says COVID-19 impacted the project with colleagues in the Yellow Sea region unable to conduct on-ground evaluations of the habitat due to COVID-19 restrictions, but says the project is still providing valuable insights into the species.

“The primary motivation for our research is to understand how birds are coping with man-made impacts during their stop in the Yellow Sea, but we’re getting these insights into the biology of the birds and how they cope with wind conditions that aren’t favourable to them.”

Dr Battley says they are tracking five more birds in the air right now and three making wind-induced island stopovers, and encourages people to visit the Global Flyway Network website to see the progress of these tenacious birds.

S&P and Moody’s Assign First-time “B” and “B2” Ratings respectively to... 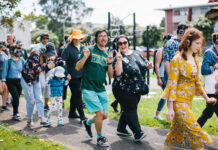