Home 24-7 The perfect gift for a violinist:
Post sponsored by NewzEngine.com

Upcoming concerts keep the flame of exciting, new and original contemporary music burning brightly at the University of Canterbury’s (UC) School of Music.

Choosing a gift isn’t always easy – unless you’re a music composer. UC Adjunct Professor James Gardner solved the conundrum of what to give his friend for his 50th birthday by composing a short solo violin piece, titled MM@L.

The piece was gifted to UC Head of Performance Professor Mark Menzies who will perform the composition in a world premiere at the New Music Central – Mark Menzies concert on Monday 10 August at 7pm, in UC’s Arts Centre Recital Room.

The highly virtuosic programme of music for solo violin/viola and for violin/viola with electronics features the highly significant work from 1972 Spectral by Tim Souster. Inspired by an extensive set of hump-backed whale-song recordings, including an array of ‘playful’ examples using echo effects in underwater canyons, and other ‘extended’ sounds not usually understood as part of these creatures’ singing, the piece is a full-on experience. Professor Menzies’ viola is electronically live-processed meaning a virtuosic performance not only on the viola, but also by operating three pedals to create the rich range of aqua-marine sound effects.

Adjunct Professor Gardner will be part of the Spectral performance in which he, along with distinguished experimental New Zealand composer Jason Long, will further process and alter the sounds of the viola onstage. “If all goes to plan we’ll be using a couple of vintage EMS Synthi A synthesisers as part of the processing as well as some digital processing, so it’ll be a historically-informed performance using some period instruments,” Professor Menzies says.

Professor Menzies will also perform his own compositions joined by the current UC string community. Cat and Five Fish Skeletons is dedicated to the professor’s sister, and was inspired by a picture frame that depicted…a cat and five fish skeletons. (a)musing hemiola(s) and When the land became dry complete the set designed to be “sonically evocative and provocative string compositions”.

Adjunct Professor Gardner has released a new website, which is a huge treasure trove of recordings, interviews and scores. 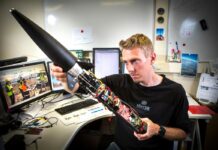