Hoardings are going up today in one of the country’s dirtiest rivers – to remind the Prime Minister of the promises she made about New Zealand waterways.

Three billboards – in the algae-filled Selwyn River, Waikirikiri – Canterbury, will include a larger than life image of Jacinda Ardern with her 2017 quote – “ We will clean up our rivers.”

“Lakes and rivers once enjoyed by kiwi families have become too polluted for our kids to swim in without fear of getting sick,” says Greenpeace campaigner, Gen Toop.

”It’s time for the Prime Minister to make good on her promises to clean up our rivers.”

Over the next few months the Ardern Government is finalising its new freshwater reforms.

Greenpeace is concerned they will fail to implement a vital part of the solution – cutting synthetic fertiliser use.

Synthetic fertiliser is applied to land in huge quantities in New Zealand to grow more grass, which enables higher numbers of cows to be farmed.

Use of the chemical has increased 627% since 1990 and in that time the dairy herd has more than doubled.

“Nitrogen pollution from cow urine and synthetic fertiliser run-off threaten the safety of our drinking water and drive algal blooms which kill off life in rivers and lakes” says Toop.

“These billboards are a gentle reminder to the Prime Minister, that a cap on synthetic fertiliser must be part of the clean water plan. Anything less will render new freshwater reforms meaningless,” warns Toop.

Synthetic fertiliser not only causes pollution through enabling dairy intensification, the chemical itself is also the third largest nitrogen pollutant into the country’s waterways. Despite this, there are currently no restrictions on the amount that can be used.

Jacinda Ardern is aware of the problem, saying in a 2017 keynote speech: “more cows per hectare, more fertiliser and irrigation, all cause more livestock effluent and nutrient pollution to run off into our rivers.”

Toop says “Putting a cap on synthetic fertiliser, is vital to creating a New Zealand where Kiwi families can enjoy clean lakes and rivers again and access safe drinking water into the future.”

“A cap on synthetic fertiliser is the first step to phasing out the use of this harmful chemical altogether and putting New Zealand on the path to higher-value and more profitable food production through regenerative farming.” 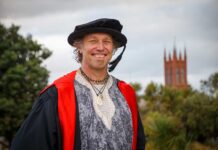