Home 24-7 Geneva: UN must recognize the right to a healthy environment
Post sponsored by NewzEngine.com

The UN Human Rights Council should recognize a safe, clean, healthy, and sustainable environment as a universal human right, Amnesty International said today. With millions experiencing hunger and displacement due to the effects of climate change and environmental degradation, it is clearer than ever that human life and dignity depend on a healthy environment.

The 48th regular session of the Human Rights Council (HRC) begins today in Geneva. Amnesty International is joining more than 1,100 civil society and Indigenous peoples’ groups in calling on member states to adopt a resolution to formally recognize the right to a healthy environment. Member states should also establish a new mandate for a UN Special Procedure on human rights and climate change.

“The dramatic impacts of climate change have exposed, with devastating clarity, how integral a healthy environment is to the enjoyment of all our other rights. It’s easy to take our planet for granted until we see the human cost of its degradation: hunger, displacement, unemployment, homelessness, illness and deaths.”

“Governments’ failure to act on climate change in the face of overwhelming scientific evidence may well be the biggest inter-generational human rights violation in history. As the primary global human rights body, the HRC must use all the tools at its disposal to counter the crisis. We call on all states to support recognition of the right to a healthy environment, at the UN and at national level. Those who do not will be on the wrong side of history and standing against the common future of humanity.”

The right to a healthy environment is legally recognized in more than 80% of UN member states through constitutions, legislation, court decisions and regional treaties. In the view of many it is also implicitly contained in global human rights treaties, though it has not been explicitly recognized by states through the United Nations. A wide range of UN entities and other intergovernmental bodies, as well as NGOs, trade unions and business groups, have voiced their support for global recognition of the right to a healthy environment.

UN recognition would make clear that states have an obligation to protect, respect and fulfil this right.  It would encourage the states who do not yet recognize this right in their national laws to do so, and motivate others to strengthen their legislation. It would also support the critical work of environmental human rights defenders, buttressing the legitimacy of their efforts and putting more pressure on states to protect them from threats and attack.

Along with the creation of a Special Procedure on Climate Change and Human Rights, formal recognition would also make it easier for the UN to support states in improving their performance on environmental issues. Currently, UN human rights bodies’ involvement in environmental issues depends on the link between environmental impacts and other rights – for example, they could look at whether the right to adequate housing has been violated through deforestation, or whether the right to health is threatened by failure to tackle air pollution. A universally recognized right to a healthy environment would make it more straightforward for UN human rights bodies to examine states’ compliance with their human rights obligations related to the environment, and to provide support and assistance to states in promoting such compliance.

Research demonstrates that state-level recognition of the right to a healthy environment contributes to improved environmental outcomes, including cleaner air, enhanced access to safe drinking water, and reduced greenhouse gas emissions. It also empowers communities to defend their rights in the face of adverse environmental impacts linked to state and corporate responsibility.

“As the UN Special Rapporteur on human rights and the environment has pointed out, when the UN adopted resolutions recognizing the human rights to water and sanitation in 2010, it spurred many states to include these rights in their national legislation. It also mobilized billions of dollars in increased investment in water infrastructure, dramatically improving the lives of hundreds of millions of people,” said Agnès Callamard.

“Recognizing the right to a healthy environment could spur similar transformative change in state approaches to climate change. We call on all HRC member states to seize this opportunity to scale up the HRC’s work on the climate crisis – one of the most daunting and urgent human rights challenges in history.”

** Media contact (please note, this press release has come from the IS office, not the Aotearoa New Zealand office) **

To set up interviews or for further enquiries please contact: 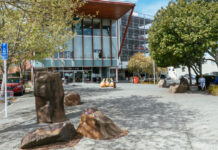 Halfway there: tree canopy coverage in Henderson-Massey at 15 per cent