Otautahi – A global new finds an average of 85 percent of adults across 28 countries agreeing that information on the use of scarce natural resources should be included on product labels.

The survey also finds 71 percent agreeing that companies using scarce natural resources should be assessed a tax for using them, even if it significantly increases the cost consumers pay for what these companies make.

A growing number of people are willing to pay extra for the things they buy, if it helps protect the planet’s scarce natural resources.

A survey carried out by Ipsos for the World Economic Forum asked 19,510 people if they were willing to pay more for goods which use scarce natural resources .

On the whole, the willingness to see taxes and price increases to protect scarce resources was stronger in developing economies.

China, India, Colombia, Chile and Peru are the top five countries where people believe such an arrangement is a good idea. The bottom five are: Japan, Poland, the US, Germany and Hungary.

There was a similar developed/developing economy split in the responses to the idea of product labelling. Broadly, developing countries were more enthusiastic. Resistance to the idea of natural resource labelling was less pronounced, however.

In response to paying more for things that use finite resources, the strongest opposition was in Japan – 54 percent disagreed or strongly disagreed.

Japan was also the country where people were less inclined toward labelling changes. But in this case, 21 percent disagreed, and five percent strongly disagreed.

The increase of carbon dioxide in the atmosphere shares a remarkably similar trajectory to indicators like GDP growth and material footprint, which describes raw material extraction rates.

There is a global need to reduce consumption and moving away from the current linear take-make-dispose approach to a more circular economy is the best solution the World Economic Forum says.

A circular economy is based on three principles: products should be designed to use fewer resources and contribute less waste; materials used to produce goods should be reused and repurposed; natural resources should be protected and replaced. 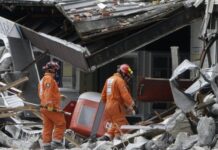