Back by popular demand.

Celebrating over 30 years together and multiple gigs both nationally and internationally over the years, Nairobi Trio are one of NZ’s favourite and most enduring jazz ensembles.

Join us for a fun evening of Nairobi-style jazz, humour and all-round great entertainment.

Nairobi Trio celebrate over 30 years together and multiple national and international dates peppered throughout the years.

New Zealand’s favourite jazz entertainers perform a retrospective from their ten album catalogue as well as some new compositions.

Fresh from an artist residency at Karekare Beach, the boys have recently had a rare opportunity to spend dedicated time working on new material for the long-awaited next album.

“These performers from New Zealand play with passion and flair that international audiences adore.” Stephan Grapelli 1990

Richard combines his love for music with a very successful career as a painter. Music and art permeate his every pore and at every turn Richard surprises his audience with his energy and enthusiasm which is skilfully channelled into his craft, engaging and seducing the listener into his highly creative world.

Someone has to take care of the business and in this group, that task falls to John, who also runs the Waiheke Jazz, Art & Music Festival.

John began his 40 year career as a singer/song-writer in the late 1970s as a touring musician, eventually becoming guitarist and drummer with neo-soul 14 piece the Big Sideways Band and with lounge lizards Wentworth Brewster & Company, before forming the Nairobi Trio with Richard in March 1989. These days John also performs a solo jazz café act under the soubriquet Johnny Lounge.

IT specialist and cross-fit fanatic Peter lays down a bed of bass resonance that is a signature of the Nairobi Trio’s sound.

Paying particular attention to arrangements and vocal interpretation, Peter plays a vital role in developing the group’s original repertoire, which is often presented to him in a raw state by John or Richard or a combination of the two. 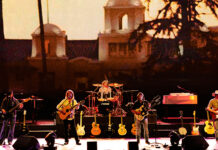 Motorsport – Foster ready to make jump to the front