The Minister responsible for the America’s Cup has confirmed the joint Crown-Auckland Council offer to host the next regatta has been declined by the Board of Team New Zealand.

“Representatives of the Team New Zealand Board have informed the Crown-Council negotiators that the offer is not sufficient. The offer expires today, 16 June. From tomorrow, Team New Zealand is now free to seek support from other partners.

“At the end of the day the America’s Cup is a global commercial operation. It is an international business as much as a sporting contest. The team is now free to look to commercial sponsors, private supporters, or other avenues to bankroll the operation.

“Regardless, we wish the team all the best for the future. Team New Zealand is a world-class team. I know they will fly the flag for their home nation in the 37th America’s Cup, whether it is held in Auckland, or taken offshore.

“Any subsequent request for government support would have to be considered by Cabinet and I cannot confirm whether the Crown would consider making another offer.

“The Crown and Auckland Council put forward a very generous offer. It was a highly credible offer, given the current economic environment and pressure on government accounts. We went into the process in good faith to secure the event.

“The negotiations and the offer are commercial-in-confidence and details cannot be shared at this point. However I can confirm it involved cash and in-kind support worth around $99 million.

“We took the same approach as we did for the last Cup. The offer involved sufficient investment to ensure the Cup Defence and the wider event could be successfully delivered on land and on the water.

“Details remain commercially sensitive. But legacy infrastructure remains in place. It was purpose-built to provide access to team bases, an events centre, the Cup Village, an international media centre, and public facilities.

“It has also previously been announced that around $5 million has been offered by the Crown to keep the team together on the condition that AC37 be hosted in New Zealand. That offer has not yet been taken up.

“Across all government spending we are looking for value for money and are targeting support where it is needed most, to support the economic recovery and deal with the impacts of the global pandemic. 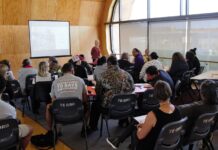