E tū aviation and border workers are looking forward to the Government’s rollout of saliva testing, which will reduce the frequency of tests done via nasal swab.

The option of saliva testing for COVID-19 for border workers will start from June, with high-risk workers prioritised first.

It means this group of workers who are subject to compulsory testing will only need to have a nasopharyngeal test every 14 days, instead of every seven days.

Saliva tests will be done around every three days in between compulsory nasal swabs.

“This will be a major advance on what we’ve got at the moment – anything that’s less invasive will be good.

“There are concerns for cabin crew having to get nasal swabs so often – at home and overseas – and about the long-term effects of that. The body isn’t designed to have things going up your nose all the time and repeated trauma to this area is something to consider.”

Tony says many cabin crew members have also felt “traumatised” by overseas testing – previously via a throat swab, but now a nasal swab – which is compulsory in several destinations.

“In Shanghai, for example, they require the nasal swabs to be done in both nostrils. When you’re having that done, combined with compulsory testing back home, it makes you really concerned about the whole process,” he says.

“Even though most of us have been vaccinated, our worlds have become quite uncomfortable with the restrictions and things we are doing to keep people safe. In that sense, the introduction of saliva testing is big bonus.”

E tū’s head of aviation, Savage, says the announcement is positive news for anyone who has to undergo regular tests – particularly international cabin crew.

“Cabin crew who fly internationally are currently subject to a test via nasal swab in New Zealand every seven days.

“The new saliva tests will mean they’re now able to push this out to every fortnight, with the saliva tests acting as a supplementary test in between.”

Enduring a regular test every seven days, combined with testing requirements at certain destinations, has been an intrusive and uncomfortable procedure for cabin crew and other E tū members, Savage says.

“It’s a routine they have endured for the good of all Kiwis and to keep each other, their families, and their communities safe.

“To be able to lessen that imposition on crew, and eventually other border workers, is an incredibly positive step,” he says.

“High vaccination rates mean the risk of infection is lower, but workers are also less likely to show symptoms if they do become unwell – frequent saliva testing can help in this regard.” 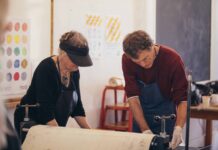