Home 24-7 SH30/SH33 Te Ngae Junction to be made safer
Post sponsored by NewzEngine.com

Te Ngae Junction near Rotorua is set to become safer with the installation of an Intersection Speed Zone.

Waka Kotahi NZ Transport Agency has installed the electronic speed signs at the intersection of State Highway 30 and State Highway 33 to help prevent deaths and serious injuries. The signs will be operational from Monday 19 April.

Safe Network Programme Director Dave van Staden says the speed zone will detect when a driver is approaching on SH30 and activate an electronic sign to temporarily show a lower, 60km/h speed limit on SH33, making it safer and easier for people to pull in to or out of SH30.

“When a driver is approaching on a side road the electronic signs activate on the main road with a lower speed limit, which greatly improves safety especially on high speed rural roads like these.

“Intersection Speed Zones have proven effective both in New Zealand and overseas. A recent research report found when active there is a 69% reduction in fatal and serious injury crashes and a 28% reduction in total crashes,” says Mr van Staden.

Intersection Speed Zones are installed at rural locations where there is a high risk of serious crashes involving people turning out of an intersection, crossing the highway or turning right in to a side road. By slowing oncoming traffic down, Intersection Speed Zones make the road safer by reducing the risk someone will be killed or seriously injured if a crash does happen.

Waka Kotahi consulted on a variable 60km/h Intersection Speed Zone for this intersection as part of the SH33/SH30 rural Rotorua and Paengaroa speed review.

Public consultation was held between August and September 2019 and new speeds implemented in June 2020 to help keep road users safe.

“While we are making SH33 safer with improvements like wide centrelines and road safety barriers, lower speed limits and safer intersections are also needed.

“Even when speed doesn’t cause the crash, it’s what will most likely determine whether someone is killed, injured, or walks away unharmed. A small change in speed can make a big difference to the outcome of a crash,” Mr van Staden says.

Waka Kotahi is continuing to work with stakeholders and the local community on further options for improving safety at Te Ngae Junction, subject to funding and timing of other works in the region.

The introduction of the Intersection Speed Zone and safer speed limits are part of Road to Zero 2020-30, New Zealand’s road safety strategy, and align with the safe system approach, which acknowledges that even responsible people make mistakes on our roads and aims to minimise the impact of those errors.

“This is something we can do to prevent avoidable deaths and help us to achieve our Road to Zero target to reduce the number of people killed or seriously injured on our roads by 40 percent over the next 10 years,” says Mr van Staden.

For more information about Intersection Speed Zones and how they work, visit www.nzta.govt.nz/isz(external link) 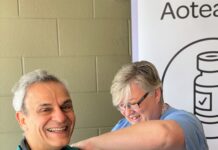