Aiden Henderson and his mum

The 71st cohort of Massey’s School of Aviation have just celebrated getting their commercial pilot’s licence, or ‘Wings’, which for many is as significant as their official graduation ceremony.

The ceremony takes place as each cohort completes the flight-training component of the Bachelor of Aviation degree and celebrates outstanding success within the group.

Dion Chew, from Singapore, has been awarded the Massey University School of Aviation Outstanding Student Award and has also been accepted  into the Flight Instructor Course for the final year of his degree.

This an opportunity that is only offered to a very small number of students but one he is honoured to achieve he says; “I’m over the moon, there’s no words to describe how I feel, it’s a long journey to get to where we are today, lots of hard work, late nights and sacrifices.

“However, nothing can compare to the sacrifice made by my family, loved ones, my New Zealand family. Without their support and encouragement wouldn’t have got to where I am today.”

Chew first developed a passion for flying while completing mandatory military service for his country and since then has been determined to become a pilot. After completing his degree through the Flight Instructor Course, he wishes to one day work for Massey Aviation and to settle down in Palmerston North long-term.

“I want to represent the international students and community, I think in the past not many international students enrol into the programme because of culture or the fact they are not exposed to this industry, so hopefully after I’ve finished the course, I’ll be able to land a job with Massey and it will be the start of a blossoming future.”

He was also the representative of his cohort to present the ‘reflections’ speech where he gratefully acknowledged the unending support of family and friends, as well as the staff of the School of Aviation, who helped the group as they navigated their way through a normally challenging degree made tougher by the interruptions due to Covid in 2020.

Another wings recipient, Kohatu Brooking, from the East Cape, has already finished his Bachelor of Aviation degree and is now undertaking the Graduate Diploma in Aviation (Flight Instruction) programme.

He says the Flight Instructor Course emphasises self-directed and independent learning and seeing the student becoming increasingly self-reliant, and thus motivated to work hard to meet the higher expectations placed upon them.

Brooking has worked for Origin Air for over a year which he says has presented further opportunities; “Being from the East Cape there isn’t a lot of aviation up there, so it feels like I am doing them proud.”

Last year, the ceremonies were streamed online due to COVID-19 restrictions, but this year saw the 71st cohort and their families attending the ceremony in its usual format. Special guests and school benefactors were also able to attend the event to distribute their various awards.

Denzel Robertson was joined by his family, who flew down from Auckland to celebrate with him. He says he’s very proud to have finished the last two years as he believes it was the hardest part of the course.

“You can tell everyone is happy it is over, but at the same time sad that our journey with each other is coming to an end,” he says.

When he finishes his degree, he wants to gain his flight instructor rating, allowing him to instruct which is the next step before he can fly for airlines.

Alan Jakimiuk, from Auckland’s North Shore, received both the Airways Corporation Academic Award for achieving the highest GPA in the compulsory courses in the Air Transport Pilot Major, and the Hugh Francis Navigation award which recognised his achievements in both navigation academics and practicum.

Shannon Mickleburgh was presented the ASPEQ Flight Instruction Award for 2020, for which he was not able to be recognized last year for due to COVID-19 restrictions.

Cullum Campbell-Morrison received the prestigious Massey University School of Aviation Skywards Award for Outstanding Airmanship, which is only presented to a student or staff of the school who, “displays outstanding airmanship in safely managing an airborne situation to avoid or correct a situation that could otherwise have resulted in serious incident or accident.”

Campbell-Morrison displayed exemplary airmanship in his role as flight instructor and pilot in command during a circuit training exercise with a beginner student in June 2020. The near-miss incident involved another aircraft which had not responded to the radio call made by Callum’s aircraft “Massey 438” announcing the intention to conduct another ‘touch and go landing’ at Fielding Aerodrome.

Christie Johnston, a graduate who has been flying for Emirates for 13 years and has recently returned from the Middle East, also joined the cohort to receive the Beth Merryweather Award, an award that is awarded annually for the outstanding student of the Bachelor of Aviation Management. 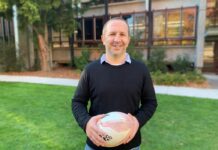