The Warehouse workers from Auckland’s Distribution Centre have voted to strike and withdraw their labour this Monday 9th November for 24 hours following a breakdown in bargaining and ongoing frustration over the company’s restructuring attempts, including particular distaste for the company’s treatment of labour-hire workers, FIRST Union said today.
The strike action, which begins at midnight on Monday, is expected to impact The Warehouse’s ability to fulfil online orders and distribute goods to stores around New Zealand. Around 270 workers will not be attending their shifts during this time.
FIRST Union Organiser Hayley Courtney said workers had voted to strike after attempts to provide a pathway for labour-hire workers into secure jobs was rejected during bargaining, and issues remained around wage increases following the company’s announcement of profiting by over $40 million while laying off hundreds of staff.
“This is a company with a horrendous track record for exploiting labour-hire workers en masse to avoid their responsibility as an employer,” said Ms Courtney.
“For these workers, who’ve been under the gun and overworked since The Warehouse ramped up its online and mail-order operations during Covid-19, it’s supremely offensive to be milked for all they are worth and then dismissed without notice or reason so the company can avoid legal obligations to employ them directly.”
“DC workers have also been watching the absolute sham and rort of their employer making hundreds redundant in stores around the country while they are literally rushing stock in and out of trucks and warehouses at a pace like they’ve never seen before.”
“Add to that the ridiculous spectacle of CEO Nick Grayston giving himself a massive million-dollar salary boost while he makes long-serving retail staff redundant, and you have a powder-keg scenario developing among workers, who are entitled to the best deal possible under the current circumstances and nothing less.”
“The Warehouse have even rejected our intentions to negotiate a Memorandum of Understanding to work together on the labour-hire issues, as this should not still be an exploitable loophole in employment law in 2020, and the Warehouse should demand more of themselves.”
“This walkout is the first strike action for these workers but may not be the last.” 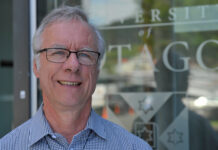