Auckland’s North Shore is a great place to spend the coming summer following the opening of a new skatepark in Glenfield, a new destination playground on Devonport’s waterfront, and impressive bush track upgrades in the Birkenhead area.

Add in some of the best swimming beaches in the region and loads of summer events, and you’ve got yourself a pretty sweet summer staycation sorted.

There’s plenty of car parking available at the park’s carpark, and buses run frequently to and from the park, seven days a week.

As far as playgrounds go, North Shore has two of the best around – the uber popular Takapuna Beach playground, and now the Bean Rock Lighthouse inspired playground on Devonport’s waterfront.

At its centre, is a 7.9-metre high tower inspired by the historic Bean Rock Lighthouse. Surrounding that, is an array of coastal elements, including an inter-tidal-reef-themed group spinner and rocker, balance springers, a crawl tunnel and rope climb, an air swing, and a three-bay swing.

The playground is suited to children up to 12 years of age.

Wai Manawa / Le Roys Bush is a nature lovers paradise located between Birkenhead village and Northcote’s Little Shoal Bay. It provides a fantastic native bush experience with plenty of tall Kauri and Totara, a waterfall, wetlands, and loads of Tui, Fantail and Kererū to both see and hear.

Recently completed improvement works on the track has delivered an even more impressive experience with large wooden boardwalks, bridges and improved stairs. In order to protect our precious native taonga, always stick to the track and use the provided shoe cleaning stations provided.

The walk takes around an hour to complete. Access to the track is located across the road from the Birkenhead Library, or at the back of Dudding Park in Northcote’s Little Shoal Bay.

Looking for somewhere both stunning and close-to-home for a swim or relaxing picnic with friends – that isn’t Takapuna Beach?

Check out Castor Bay’s Kennedy Park and its legendary 120 step staircase to the beach below. With spectacular coastal views across the Waitematā Harbour to Rangitoto Island and beyond, it doesn’t get much better than this.

Kennedy Park has a children’s playground and sandpit area covered by shade sails, along with established trees that provide shade for a picnic.

Kennedy Park is also an area rich in Māori and military history. There is an ancient Māori pā site (Rahopara Pā) dating back hundreds of years and you’ll also get to sight several historic WWII tunnels and gun emplacement areas from the beach.

There are events aplenty, big and small, planned to take place across the North Shore throughout summer. To find out what’s on offer, visit OurAuckland events. 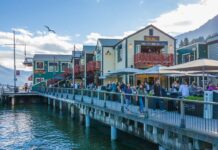