Home 24-7 Takahē deaths will inform recovery of the species
Post sponsored by NewzEngine.com

The three takahē found dead after aerial predator control in Kahurangi National Park are likely to have died from 1080 toxin, post-mortem and toxicology tests show.

Department of Conservation takahē rangers monitored 18 takahē after the predator control on 16 and 17 August and the other 15 are alive.

Takahē Recovery Programme Operations Manager Deidre Vercoe says what has been learned from this event will be used to help guide recovery of the species.

“Losing three takahē is disappointing. What has been learned about the 1080 risk to takahē will inform our management of current wild takahē populations and our selection of sites for future wild populations. We are still reviewing the information, but it clearly shows the challenges of re-establishing threatened species in the wild.

“Our goal with our takahē recovery Treaty Partner Ngāi Tahu is to return takahē to their natural tussock grasslands. With the takahē population growing at more than 10% a year, new large homes need to be found for them. We will be working to identify further suitable sites for establishing new wild takahē populations in the coming months.

“Takahē are very vulnerable to predation by stoats, ferrets and cats so it’s important to consider the predator risk in selecting sites. Large-scale predator control is a necessity for all mainland takahē sites.”

The total takahē population now numbers around 450 individuals. It includes 70 juveniles from last year’s breeding season with about 50 of those destined to live in the wild.

DOC carried out the aerial 1080 operation in the Aorere and Gouland Downs area as part of its Tiakina Ngā Manu programme to help protect threatened native species including kea, kākā, whio and great spotted kiwi from predators. It followed last year’s heavy beech seed fall that caused rat and stoat numbers to rise.

Measures were taken to reduce risk to the takahe. It included a 587-hectare exclusion zone where no bait was applied that covered most of the takahē population. The exclusion zone was kept as small as possible to provide predator control protection for other threatened native wildlife. 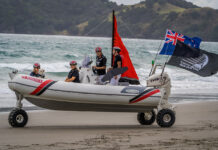