Home 24-7 Save the Children urges for children hit by Beirut blast to be...
Post sponsored by NewzEngine.com

Beirut, 5 August – As stories emerge of children being separated from their parents after the explosion in Beirut, Save the Children is calling for the safety and wellbeing of children and their reunification with relatives to be a key part of the response.
Jad Sakr, Country Director of Save the Children in Beirut: “According to reports in the media, around 300,000 people have been left homeless. That means well over 100,000 children have seen their homes destroyed and lost everything they had. At the same time, they were being told they temporarily couldn’t go outside because of the toxic gas emanating from the blast scene. Injuries such as cuts and external bleeding are not being treated at hospitals because almost all Beirut’s health institutions have reached full capacity.
“We don’t yet know how many children have died, but many will have lost their lives or been badly injured. Others will have lost their parents or family members in the blast, or become separated from them in the chaos that ensued.
“That can be extremely traumatic for a child. It is vital at such times that children are kept safe and feel protected, that they have people they trust to talk to, and that a system is set up to reunify children with their parents or other family members. Such a system is complicated to manage, and Save the Children is ready to support this if needed.
“People have started offering their houses to others who have become homeless in the blast and have lost everything. Save the Children has been in touch with vulnerable families it works with to see if they were harmed, and we stand ready to help where needed, to keep children safe, protected and fed.
“The explosion could not have come at a worse time: during an economic collapse, just a day after a COVID-19 lockdown lifted in Beirut, and just before a new lockdown would have come into effect. Many people used this window of opportunity to go running, or just socialize and hang out at the seaside and escape their worries – very close to where the explosion happened.
“Analysis by Save the Children that was published only last week, showed that over half a million children in greater Beirut were already struggling to survive or were even going hungry – and this explosion will have only made their situation worse.”
About Save the Children NZ:
Save the Children works in 120 countries across the world. The organisation responds to emergencies and works with children and their communities to ensure they survive, learn and are protected.
Save the Children NZ currently supports international programmes in Fiji, Cambodia, Bangladesh, Laos, Nepal, Indonesia, Thailand, and Mozambique. Areas of work include education and literacy, disaster risk reduction, and alleviating child poverty. 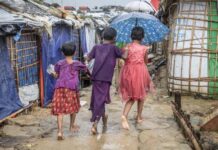