Starting as a simple Facebook event, the SVA grew into one of UC’s most sought after clubs on campus. Nearly a decade on the group is evolving further, encouraging young change makers in New Zealand secondary schools and helping them make a difference in their communities through the SVA Service Award programme.

Since its launch in 2019, 170 schools across New Zealand have signed up to the Service Award.

8,000 students are volunteering in their communities, recording their hours and attributing them to the United Nations’ Sustainable Development Goals.

This month, the first anniversary of the programme’s launch, a record 300,000 hours of volunteer work were recorded by participating students.

The SVA Service Award has seen over 37,000 service records logged over the past 12 months, with 128 students earned the Gold Badge, which involves logging more than 500 individual hours of work in their communities.

What’s clear is that this is no flash in the pan – demand continues to increase as students recognise the importance of the experience and skills nurtured by volunteer work, in the current climate.

“Our expansion to secondary schools provides a reason for students to extend themselves and their experiences that will ultimately grow their skills and networks”, says SVA Founder and Chief Executive, Sam Johnson.

“We know that it’s an uncertain time for many students as they look to their futures – but we also know that volunteering has significant career benefits, with over 90% of employers recognising relevant volunteer experience as a tangible advantage during recruitment.”

The type of volunteering is wide-ranging and varied. Over the past month, SVA Student Award students from Whangarei Girls’ High School helped to clean, organise and sort donations at the North Haven Hospice Shop, as well as creating a mural to promote National Volunteer Week. Over at Manurewa High School, the Breakfast Club Duty has become an integral part of 1st XV Rugby service, who have been prepping breakfasts for students in conjunction with KidsCan.

Work continues to ensure all New Zealand schools have access to the SVA Service Award framework, and with almost one-third of the current schools enrolled in the program registered as Decile 1 – 3, it is encouraging to see a strong uptake across the country. 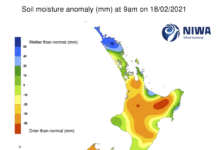 Ten years on: Christchurch earthquake a watershed in so many ways...