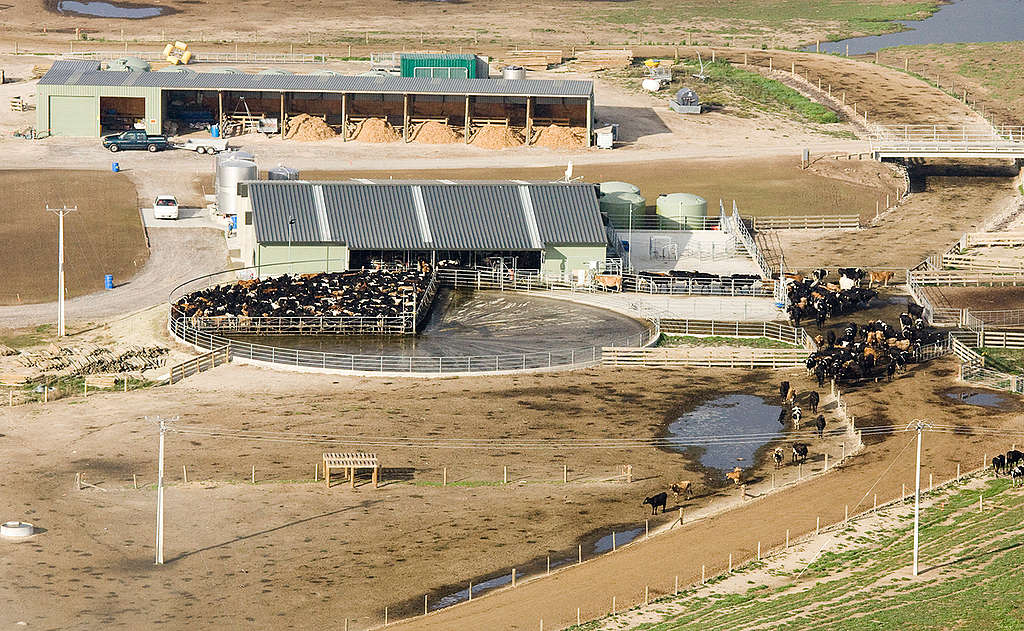 We are in a worsening climate crisis, but despite New Zealand’s ‘clean green’ credentials, successive Governments have failed to take meaningful action on reducing climate emissions.

According to recent findings by Stats NZ, climate pollution has been increasing in many regions, mostly in those regions where there has been a huge increase in intensive dairying.

New Zealand is failing to reduce emissions, and we’re failing badly.  There are simply too many cows, and too much synthetic nitrogen fertiliser is being used to keep them fed.

So much synthetic fertiliser in fact, that according to the NZ’s Greenhouse Gas Inventory, it accounts for more emissions than all of New Zealand’s domestic air travel.

But it’s even worse than that.

The Greenhouse Gas Inventory is only counting a fraction of the full impact of synthetic fertiliser on the climate.

Synthetic fertiliser is a double whammy

Firstly, there is climate pollution that comes from the fertiliser pellet itself when it’s dumped onto land by the truckload and that’s what is causing more emissions than all the planes.

Since 1990, synthetic fertiliser use has climbed 672% and in that time the number of dairy cows has nearly doubled, causing greenhouse gas emissions from intensive dairying to skyrocket.

Climate pollution from the synthetic fertiliser itself has increased a whopping 512% since 1990, while methane emissions from the bloated dairy herd have increased by 129% in the same time.

This has to change.

We’ve just recently had yet another taste of what a climate crisis is bringing. In less than a day, a month’s worth of rain hammered Northland. It damaged roads, homes, businesses and farms and threatened lives. And it came after months of crippling drought.

It’s looking even worse overseas, with around 20 million people being displaced every year already due to climate change related disasters. Wildfires have been ravaging Australia, the Amazon, and even the Arctic in the past year.

We are in a climate crisis that threatens life as we know it.

We are also in an election year.

Any political party worth their weight on climate, would commit to phase-out synthetic fertiliser, reduce cow numbers and back farmers to make the shift away from industrial dairying to regenerative farming.

Regenerative farming is all about diversity instead of monocultures. It’s about building soil health instead of degrading it, and using natural systems instead of costly and harmful synthetic fertiliser.

There are many farmers who have already taken the regenerative path and dropped synthetic fertiliser completely. They have found themselves to be just as, if not more profitable.

Around the World in 14 Days