Students at Taranaki’s Waverley Primary School had a surprise visit recently, when a Royal New Zealand Air Force A109 Helicopter dropped by.

The visit came about following a conversation between teacher Dianne Sanson and family friend Flying Officer Samuel Stewart about trying to find role models to talk to her Year 7 and 8 students.

“The purpose of the visit was to provide the students with the opportunities to understand how their interests and skills can transfer to certain career choices, knowledge of the things they need to learn in pursuit of certain careers, and understanding that the choices they make and their attitude can lead to either positive or limited prospects,” Mrs Sanson said.

Students were not told who the surprise visitors were, and parents and the local pre-school were invited to come along.

Sanson said the children were very excited while awaiting the arrival of the unknown visitors.

“This must be important if you two are here,” 11-year-old Jack said when he said his parents in the waiting group.

Four crew members, comprising three pilots and one maintenance engineer (avionics) said they could see the children waving as they approached the school.

“We didn’t know it was a surprise for the kids until after we got there, so that was quite a surprise for us. It was very cool walking over to all of them sitting nicely waiting with great anticipation to come have a look at the helicopter.” Flying Officer Hayley Vincent, from No 3 Squadron, said.

The crew members were looking forward to sharing about their roles and what life was like within the Air Force.

“A lot of the students were interested in how we joined up, what age we were, and what subjects they should focus on at school. Most of them had no idea about the wide range of jobs you can do in the Defence Force so it was pretty cool explaining it to them and seeing their eyes light up,” Flying Officer Corey Fothergill said.

Ava, 11, enjoyed hearing about how one of the pilots didn’t get into the Air Force the first time they applied, saying it showed people shouldn’t give up and should keep working to achieve their dreams.

Others mentioned being inspired by the variety of job opportunities, enjoying the chance to explore the inside of the helicopter and learning about how the team worked together.

Leading Aircraftsman Mairi Law said she really enjoyed seeing how excited and interested the kids were in her role as a maintenance engineer (avionics), especially the girls.

“They seemed impressed to see a female in what they saw as a normally male-orientated role. It felt good to spark their interest and hopefully this will encourage them to work hard at school and perhaps consider a Defence Force career they may otherwise never have considered.”

Mrs Sanson said the playground was buzzing after the visit on Wednesday.

“The junior students thought it was so amazing being able to sit in the helicopter. Another common point of conversation was the fact that the pilots weren’t even old.”

The Air Force regularly engages in community events to give an insight into life inside the Royal New Zealand Air Force. 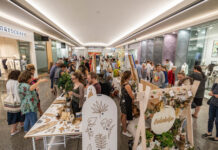