Home 24-7 From Paihia to the Sinai Peninsula
Post sponsored by NewzEngine.com

There won’t be many Paihia locals who can say that they’ve ever been deployed to the Sinai Peninsula in Egypt as a Naval Military Policewoman, but former Kerikeri High School student Petty Officer Military Police Carla Marsh is doing just that.

Normally stationed at Devonport Naval Base, this is her first land deployment after seven years with the Royal New Zealand Navy. She’s part of the Kiwi contingent working with the Multinational Force and Observers (MFO), an international peacekeeping force overseeing the terms of the peace treaty between Egypt and Israel.

She decided to join the Navy because of her love for the sea, and then to become a Military Policewoman because of a passion for doing the right thing and leading by example.

“I’m really interested in investigations and enjoy talking to people. A lot of our job is problem solving so I like the challenge of that and not one day is the same. I like being able to help others when they have an issue that needs resolving, and we also get to work with the New Zealand Police.”

Her Military Police role in New Zealand is diverse and can range from general policing duties to investigations involving military personnel. In the Sinai, she’s the section commander at the Force Military Police Unit in South Camp.

“Our mission is to ensure maintenance of discipline and good order within the MFO, taking into consideration the jurisdiction, authority, powers, and discretion of the Force Provost Marshal.

“As a section commander my job is to facilitate the daily operation of the Force Military Police Unit, ensuring preventative policing and continuation training is conducted, responding to incidents and conducting on-base security patrols to support the MFO mission.”

Being deployed in the midst of the COVID-19 pandemic has made life interesting for the Kiwis, but thanks to an early introduction of lockdown procedures and isolation of the camps on 10 March, there have been no cases of COVID-19 within the MFO and life has been able to continue relatively normally.

PO Marsh will soon be able to turn her attention to heading home, although the normally six-month deployment is likely to run slightly longer because of the difficulties in returning to New Zealand.

NZDF personnel normally rotate out of missions every six to twelve months, depending on the nature of the deployment. Border closures, travel restrictions and other measures imposed to restrict the spread of COVID-19 mean the Kiwis in the Sinai are waiting to hear when they’ll be able to return home.

“This has been an amazing six months. There are not many jobs in the world where you can be moved 10,000km from home to do a job that helps maintain world peace.

“The MFO has been in the Sinai for 38 years and by being here we’ve helped defuse one of the world’s hot spots.  Knowing this makes being away from home worthwhile.” 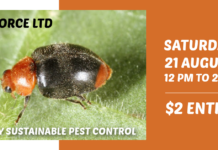