The announcement today that Air New Zealand will fly its 787-9 Dreamliner aircraft between Christchurch and Auckland three times a week to help transport cargo from the South Island to the rest of the world has been welcomed by Canterbury Employers’ Chamber of Commerce Chief Executive Leeann Watson.
The services are being launched in response to significant demand from the South Island freight forwarding and export communities, with the first flight departing from Christchurch tomorrow night as part of a support agreement with the Ministry of Transport. The agreement sees the Dreamliner fly Christchurch to Auckland on Tuesdays, Thursdays and Saturdays.
“Air freight is absolutely critical for the Canterbury region. As we move through the alert levels, it is imperative that we are able increase freight to cope with increased output.
“In January and February this year, air freight accounted for 30 per cent or $494 million of exports from Canterbury. However, decreasing international air connections has put increased constraints on air freight from March onwards.
“For businesses this has meant delays and short-term impacts on their ability to get their product to the international market, resulting in cashflow issues at a time when financial impacts are already significant.”
Ms Watson says that more air freight over the coming months is needed.
“While this will be welcome news for local exporters, more international air freight is needed, particularly as we move through alert levels and see increases in production. Nationally, there are currently around 90 commercial and charter flights running per week. However, prior to the COVID-19 impact, New Zealand would have had more than 600 flights per week, so there is a long way to go.
“We have a diverse economy and region and play a critical role in the nationwide production of goods for international markets. It’s early days but we have a strong base for recovery if we can continue to keep these key channels to market open and moving.
“The sooner we can respond, recover and reposition our region again, the better.”

Ultimaker Transformation Summit: How to remain flexible and productive as a...

Farming – Call a halt to housing eating away at our... 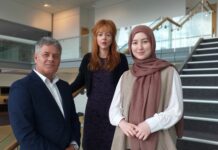