Police investigating an incident where a person allegedly spat at Auckland Tranport staff on a train at Britomart last week have made an arrest.

A 32-year-old female was arrested yesterday and is appearing in the Auckland District Court today charged with Assault under the Crimes Act.

Police would like to thank members of the public who came forward with information which helped lead to the arrest of the alleged offender.

Police are unable to comment further as the matter is now before the Courts. 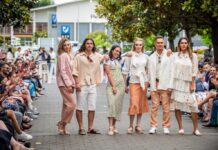