Police investigating the suspicious death of a person whose remains were found buried in a shallow grave on Rangipo Intake Road, near Tongariro, have linked it to an address in Massey, West Auckland.

The investigation is focusing on the movements of a Chinese man, aged in his early 30’s, whose whereabouts are unaccounted for since 2017.

Following a number of enquiries, Waitemata CIB executed a search warrant at an address yesterday on McWhirters Farm Lane, Massey in relation to the ongoing investigation.

A scene examination is underway and continues at the address today, involving a team of Detectives, ESR and Photographers.

The property has been cordoned off and a scene guard is in place.

The formal identification process is ongoing, and as we have previously said, this could be a lengthy process.

Police won’t be commenting on the deceased’s identity until this is completed.

The address that is the subject of the scene examination was recently sold to a family and we want to emphasise that the current occupants are not in any way connected to this investigation.

They have been relocated by Police for the duration of the scene examination and are being provided with the appropriate support and assistance. 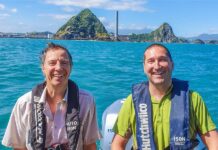 COVID-19: Focus and funds must pivot to Africa as countries reel...