The crew onboard The Braveheart.

In 2015, scientists from Massey University, Auckland Museum, and the University of Waikato travelled with film crew from NHNZ to Rangitāhua– The Kermadec Islands to study the archipelago’s biodiversity.

NHNZ went to Rangitāhua to film an episode for the second season of its popular show Our Big Blue Backyard for TVNZ, funded by NZ on Air.

The natural history footage recorded three species of fish for the first time at Rangitāhua, which are additions to the fishes that are found in the New Zealand Exclusive Economic Zone. The footage provides new reef fish biodiversity information for the pristine but rarely visited archipelago.

Massey University researcher Dr Libby Liggins says:  “Our collaboration evidences the value of natural history footage, other unconventional sources, as well as unlikely collaborations in generating new knowledge regarding biodiversity and change – as Prime Minister Jacinda Ardern says  ‘we all have a role to play’”.

The discovery of tropical and subtropical species Labroides dimidiatus, Chaetodon mertensii, and Ephinephalus rivulatus extends the known distribution for each species, two of which are also new records for New Zealand waters.

A team of 17 included crew, scientists and NHNZ documentary filmmakers were aboard the research vessel Braveheart, where NHNZ filmed their series and scientists carried out research.

“Rangitāhua is expensive and difficult to reach for scientists, so this collaboration was a perfect opportunity to piggy-back on the NHNZ voyage and builds on our knowledge on the biodiversity of these remote islands. It is a great example of where a collaboration has unexpected but positive outcomes for both partners,” Dr Thomas Trnski, Head of Natural Sciences at Auckland Museum, and science leader for the voyage says.

Click this image to watch the footage captured by NHNZ showing the newly-discovered fish species.

Our Big Blue Backyard executive producer and series producer, Judith Curran, says she and her team are excited to have assisted in the discovery of the fish.

“NHNZ’s Our Big Blue Backyard film-making team is super proud to have played a part in the discovery of these fish species. For an NZ on Air funded series to be able to connect with a huge New Zealand audience and collaborate with scientists in this way, in such a special corner of the planet, is as good as it gets,” she says.

The discovery of the fish species and the collaboration between natural history filmmakers has been written into an extensive report, published in Scientific Reports on February 21, 2020.

View the video to watch the discovery of three fishes caught on film.

Maritime workers welcome statements from Mayor and Minister on Ports of... 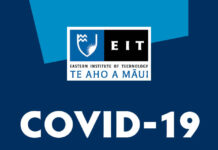