2. Hon SIMON BRIDGES (Leader of the Opposition) to the Prime Minister: Does she stand by her statement when asked yesterday if there are standards of behaviour she believes minor parties in her Government should adhere to, “of course”?

Rt Hon JACINDA ARDERN (Prime Minister): The only amendment I would make is that I believe all political parties should adhere to a high standard of behaviour.

Hon Simon Bridges: Has she seen any recent reporting of behaviour by minor parties in her Government that might, if she were to seek more information, breach her minimum standards?

Rt Hon JACINDA ARDERN: No. I’ve seen statements from a minor party recently, demonstrating that those Ministers, MPs, have not been involved in the behaviour that the member alludes to.

Hon Simon Bridges: Does she accept the Cabinet Manual states that “Ultimately, Ministers are accountable to the Prime Minister for their behaviour.”?

Hon Simon Bridges: Does she believe all of her Ministers have acted lawfully and behaved “in a way that upholds, and is seen to uphold, the highest ethical standards” as required by the Cabinet Manual?

Hon Simon Bridges: Does she think her Deputy Prime Minister upholds, and is seen to uphold, the highest ethical standards?

Rt Hon Winston Peters: If the Prime Minister knew that a certain political leader was going to be swept into a court case involving $200,000 of illegal donations to a party, would she act on that matter?

SPEAKER: Order! On occasions we do, these days, allow hypothetical questions. But if that question was taken seriously, it would be referring to a matter that is currently before the court, which would be ruled out both on that basis and also a lack of prime ministerial responsibility for it.

Rt Hon JACINDA ARDERN: If the member wishes to ask a direct question about an issue around ministerial conduct, he is most welcome to, but I imagine the public right now sees the deep irony of this line of questioning from the leader of the National Party.

Hon Simon Bridges: Does she trust her Deputy Prime Minister?

Rt Hon JACINDA ARDERN: Yes. This is how we’ve managed to deliver an economy together, and our relationship—an economy that has unemployment at 4 percent, that has wage growth at 3.6 percent, that today has delivered 46,000 New Zealanders out of poverty. If that member might look for a moment about what New Zealanders actually care about, it’s their wages, it’s their housing costs, it’s what we’re doing on child poverty, and with the New Zealand First Party and the Greens I am proud of what we have delivered through our trusting relationships and a strong Government.

SPEAKER: Before the Leader of the Opposition calls, I just want to say that during that answer there were two inappropriate interjections made. I’ve been asked to be a bit more liberal and soft by people on both sides, and I will, but there is a limit.

SPEAKER: Yes. The member is absolutely correct, but it does depend on the question. When there is a question of that sort, which goes to a question of trust and why, there will be a full opportunity to respond.

Hon Simon Bridges: Does she think her Deputy Prime Minister justifying taking photos of journalists by saying it’s just doing “to them what they do to others all the time” meets the standards set out in the Cabinet Manual?

Rt Hon JACINDA ARDERN: Again, the Deputy Prime Minister has put out the clarity around that situation today and, again, I don’t see how this relates to ministerial conduct.

Hon Simon Bridges: Has she spoken to her Deputy Prime Minister about the photographs taken of journalists?

Rt Hon JACINDA ARDERN: The Deputy Prime Minister has made it clear that he has had no involvement in that situation. 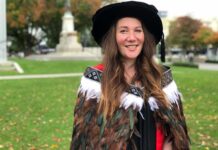