The West Coast has had a funding injection of over $1.2 million from the Provincial Growth Fund, Under Secretary for Regional Economic Development Fletcher Tabuteau announced at Waitangi Day commemorations in Hokitika today.

The PGF projects announced are:

“Digital connectivity is critical to driving innovation and creating a sense of community and connection. PGF support for these hubs will connect Westport, Greymouth and the Westland District to online services to benefit business owners and entrepreneurs. Westland’s hub will be mobile, and can be moved to different locations through the year,” Fletcher Tabuteau said.

“The PGF places a strong importance on regional connectivity, with $100 million allocated from the Fund for getting communities online.  For the West Coast, the PGF announced $32.8 million to improve access to ultra-fast broadband and fix mobile black spots.

“Today’s combined $1.2 million investment for these three digital hubs complement that by providing support for businesses, communities and people, to give them the internet access they need. This is essential for the West Coast to grow and thrive.

This project will mean Ngāti Waewae can source and manage pounamu on their land and grow their carving and tourism ventures. While Māori own pounamu, it is currently sourced as a by-product from gold and coal mining, and iwi pay a significant fee to recover it. This PGF-funded project will assist in purchasing equipment to secure a direct supply, as these products are in huge demand.

“We are pleased to support this project through the Whenua Māori allocation, with a core purpose of increasing productivity of Māori land and the economic return to its owners,” Fletcher Tabuteau said.

“Over the last two years, the Provincial Growth Fund has announced over $150 million in projects directly benefiting the West Coast and so it is great to be back here on this important day to bring this positive news to the West Coast. And this is not the end of it,” Fletcher Tabuteau said.

Rural Communities Minister and local MP Damien O’Connor said this is another example of the Coalition Government investing in the Coast after years of neglect by the previous Government.

“Today’s announcement is really great news and is a continuation of the hundreds of millions that have been invested in education, tourism and infrastructure projects on the Coast. This government believes in the Coast and we’re backing it to succeed.” 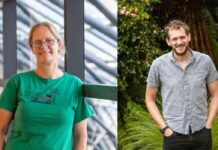